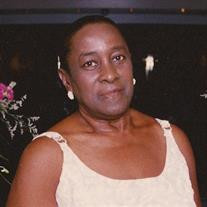 On Wednesday, August 2nd, 2017 at 5:48 P.M., “Peacefully” the Lord guided Zenovia to her heavenly home. With quiet departure she was on the “Wings of Prayer!” Zenovia Angela O’Connor Andrews was born on March 8, 1929, the daughter of Andrew & Lily O’Connor. She grew up in Port-of-Spain, Trinidad (WI), known as “Zee” where she lived and had two children, Janice & Edward. Once leaving and arriving in the United States, she met the love of her life, Kenneth Andrews. Known as a dubious hard worker, Zee began her career at Angostura where she was a highly decorated employee. She decided to spread her wings and moved her family to New York where she had worked most of her life at Brooklyn Jewish Hospital as a dietician. She later decided to retire in Florida as a caterer. Upon her final days on this Earth, she lived with her son and his family. Zee enjoyed taking part in carnival (Mass-band), travelling, cooking, knitting, crocheting, going to the movies & anything music-related. She enjoyed life and everything it had to offer. Her house was not just a meeting place, it was home. You could always go over and talk with her on just about anything & get good advice. Zenovia was a great cook & you could always find something good to eat at her home. Her crocheting projects lead to many blankets for her grandchildren. Her pleasant spirit & her way of helping others will surely be missed. She is preceded in death by her husband, Kenneth Andrews; her parents, Andrew & Lily O’Connor. She leaves to cherish her memories, her daughter Janice O’Connor Bertrand (Grimes) and son Edward G. O’Connor. Eleven grandchildren; Bernadette, Bianca, Edward Jr., Sean, Sylvester, Lauralee, Lerone, Devan, Andrew, Aaron & Matthew. Eleven great-grandchildren; Precious, Paige, David Jr., Edward III, Alicia, Kristen, Jordyn Chanelle, Jayden, Jeremy, Makayla & Xavier. A host of nieces and nephews, other relatives & friends. For those we may have missed, please blame it on the head and not the heart. Words cannot express our deepest appreciation. The relatives of the late Zenovia Andrews take this opportunity to express our sincerest thanks to all who showed their love & concern for her during her illness. To send flowers or a memorial gift to the family of Zenovia Angela O'Connor Andrews please visit our Sympathy Store.

The family of Zenovia A. Andrews created this Life Tributes page to make it easy to share your memories.

Send flowers to the Andrews family.