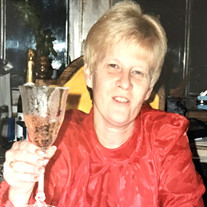 Margaret Ann Hoffman 72 of Punta Gorda Florida passed away on May 22, 2019 at home with her husband Jim and son Paul holding her hands; it was peaceful. She had suffered greatly fighting Pancreatic Cancer for 13 months at Moffitt Cancer Center. I would not recommend this hospital to any one! Margie was born in November of 1946 in East Cleveland, Ohio to Daniel Malloy and Margaret Lechowiz both have passed. She has 3 younger brothers and 2 sisters, all still living. Margie went to St. Jerome's Grade school in Cleveland, where she met her future husband Jim, who was a year ahead of her. She then went to Collinwood High school in Cleveland. Then on to Notre Dame Women's College. She was going to school and working in the evening when Jim who had been in the navy stopped in for milk at the Lawson's she worked at. They chatted and after a couple of months of Jim buying a lot of milk, Margie asked him out. They were married at St. Jerome's Church September 2,1967. They renewed their vows at St.Jerome's on their 50th anniversary September 2, 2017. Margie worked as a manager at Ohio Bell for 28 years. Then took 4 years off to manage their properties. She then went to work at Progressive Ins. for 8 years. In December of 1979 Margie gave birth to a son Paul Mervin. In 1998 Margie and Jim bought a 4 plex on a canal in Punta Gorda Isles preparing for retirement. In 2002 they bought 2 lots on a canal and built a house in the middle of them. They then moved here in Dec. 2003. Margie loved to fish from the time she was a little girl. They joined the Punta Gorda Isles Fishing Club she served 3 years as secretary of the club. She was the 1st female Grand Master Angle of the Club and also was the 1st female to get her Coast Guard Captains License. She won the Annual Isles Trophy Race for female anglers in 2010 and 2014. She had her favored corner on the boat and her Pink Pole was hard to beat. A Catholic service will be held on Friday June 7th at 10am by Deacon Thomas Caliguire from St. Charles Catholic Church at Royal Palm Memorial Gardens at 27200 Jones Loop Rd., Punta Gorda, Fl. Sacred Heart offered no compassion or help scheduling a memorial mass so we went elsewhere. Please send no Flowers If you want to donate in Margie's name donate to St Charles Catholic church. There will be a private gathering after the service. Please scroll through the beautiful pictures and tributes of Margaret through our photo/video section. To enlarge photo please hold down Ctrl + key at same time. To make the photo smaller please hold Ctrl - key together.

Margaret Ann Hoffman 72 of Punta Gorda Florida passed away on May 22, 2019 at home with her husband Jim and son Paul holding her hands; it was peaceful. She had suffered greatly fighting Pancreatic Cancer for 13 months at Moffitt Cancer Center.... View Obituary & Service Information

The family of Margaret Ann Hoffman created this Life Tributes page to make it easy to share your memories.

Margaret Ann Hoffman 72 of Punta Gorda Florida passed away on...