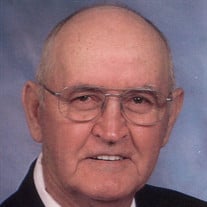 William "Bill" Herbert Beck, 88, of Punta Gorda, FL passed peacefully in his sleep at home with his family on Friday September 22, 2017. He was born December 17, 1928 in East Canton, Ohio to Evart and Margaret Beck. Bill attended East Canton High School and graduated from Louisville High School. He belonged to the Operating Engineers Local 18 for 20 years. In 1970, he moved to Punta Gorda and purchased the Jo-El Motel. He also worked for General Development for 12 years. Bill enjoyed tinkering in his garage, making things work better, helping friends, and neighbors and caring for others that need help. He was always there to help his children with their projects and whatever else was needed for him to do. He enjoyed playing Eucre with friends and family and he enjoyed watching Westerns on TV in his later years. Bill was a member of the Friendship United Methodist Church and the South Punta Gorda Heights Civic Center in Punta Gorda, FL. Bill is survived by his wife Joan of 65 years, his 3 children, Brenda (Kent) Gray of Myrtle Beach, SC, Bill (Charlotte) Beck of Berlin Center, Ohio and Jim (Val) Beck of Punta Gorda, FL and 8 grandchildren; Nikki (Mike), Travis (Katie), Brooke (Zach), Janine (Rich), Jarrod (Megan), Wyatt (Dalton), Jessica (Patrick) and Blair (Andrew), 11 great grandchildren; Kaleb, Taylor, Isaac, Evelyn, Parker, Urban, Joshua, Bailey, Mara, Forrest, Savannah. He is also survived by his sister, Arlene Rodman, and two brothers, Raymond Beck and Robert Beck, as well as nieces and nephews and extended family. Bill was a devoted husband, loving father, grandfather, great grandfather and friend to all. The Funeral Service will be at 11:00am, Tuesday September 26 at the Friendship United Methodist Church, 12275 Paramount Dr, Punta Gorda, FL 33955. Bill will be laid to rest at Royal Palm Memorial Gardens with family in attendance.

The family of William H. Beck created this Life Tributes page to make it easy to share your memories.

Send flowers to the Beck family.