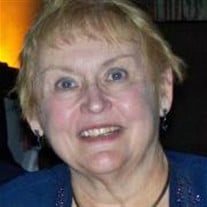 Stephanie Anne Romine, 71, a resident of the Herons Glenn community in North Fort Myers, FL, formerly of Concord and Perry, OH, passed away Saturday, February 2, 2019 in Cape Coral, FL. Stephanie was born in Marion, OH to Theodore and Ruth Ochs on August 16, 1947. She married Richard Romine on September 27, 1969. Stephanie began her career as a teacher until she found her true calling as a geriatric nurse where she spent over two decades as a registered nurse for the Hospice of the Western Reserve in northeast Ohio. She loved nursing and caring for the elderly. She felt it was a privilege to serve as a hospice nurse and provide compassionate care to those terminally ill and their families. Stephanie’s other passion was her family. She was a wonderful mother and grandmother who made family a priority. She loved traveling to see her grandchildren and was committed to being a significant part of their lives. She will be deeply missed by her family. Stephanie was a member of the St. Therese Catholic Church in North Fort Myers. She was the past president of Herons Glen Socialites, a member of Beta Sigma Phi service sorority, volunteered for Hope Hospice and retired from Hospice of the Western Reserve (Ohio) as the director and founder of their alternative home care program. She is survived by her loving husband of 49 years, Richard Romine; her three children and their spouses, Steve and Tara Romine of Upton, MA, Kevin and Deb Romine of Roswell, GA and Susan and Matt Cahill of Evergreen, CO. She is also survived by her eight grandchildren whom she adored: Alex, Jack, Nathan, Julianne, Sean, Caitlin, Elizabeth and Ryan. A funeral mass will be held 11:00AM, Tuesday, February 12, 2019 at St. Therese Catholic Church, 20115 N. Tamiami Trail, North Fort Myers with Father Tom Heck officiating. A private burial will follow the funeral mass. The family will also host a reception lunch at the Herons Glen Country Club on Tuesday, February 12. Details will be provided at the funeral mass. Stephanie’s family will receive friends for a time of visitation 4:00 – 6:00PM, Monday, February 11, 2019 at Mullins Memorial, 3654 Palm Beach Blvd, Fort Myers, 33916. In lieu of flowers the family is accepting donations to Hospice of the Western Reserve in Northeast Ohio or Hope Hospice, 9470 Healthpark Cir., Fort Myers, FL 33908. Mullins Memorial Funeral Home & Cremation Service, Fort Myers, is entrusted with final care.

The family of Stephanie Anne Romine created this Life Tributes page to make it easy to share your memories.

Stephanie Anne Romine, 71, a resident of the Herons Glenn community...

Send flowers to the Romine family.