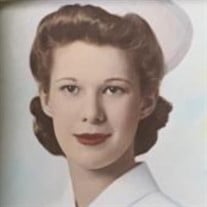 Olive Mae Cookson passed peacefully at her son’s home, William, Jr, in North Miami Beach, FL on March 10, 2021 at the age of 98 ½ years. She has gone to be with her husband, William, Sr. of 54 years after almost 24 years of being separated. Olive spent her childhood on lighthouses and islands as her father was a lighthouse keeper, first on Naushorn Island, Cape Cod and then Gurnet Point, Plymouth, Massachusetts. One of her favorite childhood stories was while her younger brother was being born. She was out in the boat with her father and older brother. Olive fell outside the boat and was holding on by her fingers. Her brother yelling, ‘Daddy, Olive is outboard.’ She was just holding on by her fingers when she was just 2 years old. Despite this, she loved the Gurnet and the ocean, only leaving to attend Newton Wesley Nursing School. During nursing school, she met her future husband, a handsome officer in the US Navy heading to the West Pacific for WWII. In 1962, her new family of four moved to South Miami. She returned to nursing in 1971, retiring in 1988 from South Miami Hospital where she was nurse manager of the Labor & Delivery Department. After retirement, she and her husband moved to Burnt Store, Punta Gorda in 1993, where they could be seen cruising the islands in their Grady-White motorboat. She moved only to Stone Mountain, GA to live with her daughter and her husband in 2005 and then to North Miami Beach in 2017 not wanting to spend another winter outside of Florida. Olive was predeceased by her brother George Davis of Plymouth, MA who owned the boat yard and marina next to Plymouth Rock for many decades. She is survived by her son, Bill, Jr. and his two daughters, Joann Tiersma of Boulder, CO, who followed her grandmother’s nursing career becoming an intensive care nurse, and Lynda Tiersma and her partner Bruce Palmer of Greenfield, MA; her daughter, Dr. Susan Temporado Cookson, and her husband David Temporado of Clayton, GA; her brother, Frank Davis of Ft Lauderdale, FL; and several dear cousins still near Plymouth, MA. Her love of nursing and medicine has continued in her granddaughter and daughter. Thank you for being a part of her journey.

Olive Mae Cookson passed peacefully at her son&#8217;s home, William, Jr, in North Miami Beach, FL on March 10, 2021 at the age of 98 ½ years. She has gone to be with her husband, William, Sr. of 54 years after almost 24 years of being separated. Olive... View Obituary & Service Information

The family of Olive Mae Cookson created this Life Tributes page to make it easy to share your memories.

Send flowers to the Cookson family.