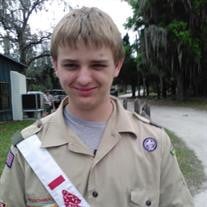 Nicholas Paul Taylor of Lehigh Acres, Florida, passed away suddenly Thursday, August 18, 2016 at his home. He was 15. Nicholas was born January 6, 2001 and he was the beloved son of Joseph Wesley and Sherry Lee Taylor. He was a member of Next Level Church, loved the Lord Jesus and was active in youth groups. In addition to his faith, Nick loved scouting especially travel adventures and camping. He was an active member of the Boy Scouts of America and The Order of the Arrow – a society within the Boy Scouts of America created to honor those Scouts that best exemplify the Scout Oath and Law. He enjoyed school, music, art and reading as well as playing family video games. He also loved animals; especially wolves. Nick had aspirations of being a soldier and was a member of the JROTC and the JROTC Raiders. He leaves behind to cherish his memory, his parents, Joseph and Sherry Taylor of LaBelle, FL; his sister, Julie Taylor-Cure (Abe) of Attleboro, MA; two brothers, Joseph Taylor (Stephany) of Clarksville, TN (US Army), and Logan Taylor of LaBelle, FL. He is also survived by his grandparents; Ken and Carol Kinney of LaBelle, FL and Bertha Taylor of North Carolina. He also leaves behind his Uncle, Kenneth Kinney Jr. of LaBelle, FL; Uncle, Rob Krampen and Aunt Jennifer Krampen and his cousins, Amber, Brian, Connor, Brittany, Madison and Landon. He will also be dearly missed by many friends, extended family and his scouting brothers. A Memorial Service for Nick will be held 6pm, Thursday, August 25, 2016 at Grace United Methodist Church, 14036 Matanzas Dr., 33905. The family requests in lieu of flowers, donations in Nick’s honor be made to Boy Scout Troop 80 of Fort Myers, c/o Grace United Methodist Church, 14036 Matanzas Dr., 33905 Fort Myers or Shy Wolf Sanctuary P.O. Box 3032, Naples, FL 34106. Arrangements are by Fort Myers Memorial Gardens Funeral Home and Royal Palm Memorial Gardens. .

Nicholas Paul Taylor of Lehigh Acres, Florida, passed away suddenly Thursday, August 18, 2016 at his home. He was 15. Nicholas was born January 6, 2001 and he was the beloved son of Joseph Wesley and Sherry Lee Taylor. He was a member of Next... View Obituary & Service Information

The family of Nicholas Paul Taylor created this Life Tributes page to make it easy to share your memories.

Send flowers to the Taylor family.