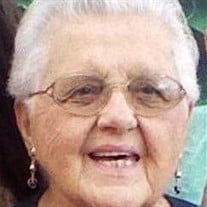 Mary Dolores Gellock, 82, of Punta Gorda, FL passed away June 4, 2019. She was born September 30, 1936 in Phillipsburg, NJ to Herman and Mary Boos. Mary grew up in Phillipsburg, NJ and graduated from Phillipsburg High School in 1954. Shortly thereafter she met & married the love of her life, Franklin P. Gellock in 1956. Mary & Frank made their home in Hampton, NJ where they raised four children. Mary was an active member of the community and was a member of the Hampton Fire Department’s Ladies Auxiliary. She retired in 1995 after 21 years of service with the state of New Jersey. Upon retiring, Mary & Frank moved to Port Charlotte, FL where they enjoyed bowling leagues, casino trips, were members of the Port Charlotte Moose Lodge and enjoyed numerous cruises. Mary also enjoyed going to bingo. She was pre deceased by her husband, Franklin P. Gellock, of 52 years. Mary is survived by her children, Tina Billado, Terry Ross (Brian), Diane Arnold (Keith) and Franklin P. Gellock II. She is also survived by her four grandchildren, Stacy Baumhardt (Kevin), Jeremy Ross, Matthew Arnold, Amanda Arnold and her two great grandchildren Emily & Jacob Baumhardt. She is also survived by her brother-in-law Robert P. Gellock and his wife Dot. As well as her two fur babies, Banjo & Bambi. Services are to be held privately and inurnment will be at the Royal Palm Memorial Gardens in Punta Gorda, FL In lieu of flowers, donations in Mary’s memory may be made to Tidewell Hospice, the Animal Welfare League of Port Charlotte, FL or to the Harry Chapin Food Bank of Fort Myers, FL

The family of Mary D. Gellock created this Life Tributes page to make it easy to share your memories.

Send flowers to the Gellock family.