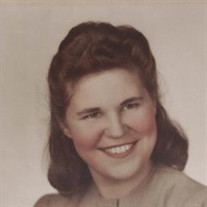 Louise Marie Skay, 97, of Las Vegas, NV., earned her angel wings on March 18, 2016 and is resting comfortably with her heavenly father. The daughter of Rose Marie Killmurray and Theodore Millian. She was born on March 8, 1919 in Rahway, N.J. Louise was preceded in death by her parents, her husband Harold, her sisters Rose McInyre and Bertha Keyes and her sons Harold Jr. and Lawrence. She was a graduate of Saint Elizabeth's School. She married Harold Skay on May 21, 1942 at Saint Elizabeth's Catholic Church in Linden, NJ. After living a short time in Linden, NJ, Louise and Harold headed west to California, where they lived for several years and made many happy memories. Family duty called, and they returned to Old Bridge, NJ in 1948, where they lived for 20 years and Louise joyfully raised their 5 children. In 1969 Louise and Harold moved to Port CHarlotte, FL. After a long illness, Louise's husband passed away in 1984 and Louise wanted to thank the medical community who had cared for Harold. Learning to drive at the age of 64, Louise thus began a long and rewarding career of volunteer service for two hospitals in Port Charlotte that continued for fifteen years until she moved to Las Vegas, NV. Louise was known for her beautiful smile and comforting way with patients, families and medical staff at St. Joseph's Hospital and Fawcett Memorial Hospital in Port Charlotte. Upon relocating to Las Vegas in 2000, she continued volunteering at two hospitals in Nevada for many years until her health declined. She was a welcome face to the staff and patients at both Mountainview Hospital and Summerlin Hospital for many years, even though she was in her 80's and had to travel city buses just to get to these locations. Louise loved nothing more than to help others and was honored for her many years of faithful service by all the hospitals she served, as well as the Red Cross organization. Later in life, Louise was able to travel throughout the country and Europe to visit her children and grandchildren and leaves a loving legacy of service and generosity. Louise is survived by her three daughters and one son-in-law, Rosemary Donato of Las Vegas, NV, Kathleen Patterson of Port Charlotte, Florida and Linda (and Dean) of Wake Forest, NC, and by her grandchildren, Michael Donato, Cassandra Patterson, Christopher Cobb, and Chloe and Jessica Lang. In lieu of flowers, the family appreciates donations to the Nathan Adelson Hospice Foundation, 4131 Swenson St., Las Vegas, NV 89119.

Louise Marie Skay, 97, of Las Vegas, NV., earned her angel wings on March 18, 2016 and is resting comfortably with her heavenly father. The daughter of Rose Marie Killmurray and Theodore Millian. She was born on March 8, 1919 in Rahway, N.J.... View Obituary & Service Information

The family of Louise Marie Skay created this Life Tributes page to make it easy to share your memories.

Send flowers to the Skay family.