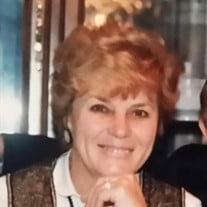 Lorraine E. Voytek Antal, 88, of Punta Gorda, Florida, a resident for more than 25 years, formerly of Washington, PA passed away Friday, September 14, 2018 in Port Charlotte, Florida. She was born January 5, 1930 in Crescent Heights, PA, the daughter of John Voytek and Anna Bednar Voytek. Lorraine was a homemaker who enjoyed traveling, polka dancing, was an avid golfer, loved gardening and won awards for her gardening skills. She was a member of San Antonio Catholic Church during her time in Florida. During her younger years, she was employed by Giant Eagle Corporation. On September 3, 1970, she married William L. Antal who is deceased. Lorraine is survived by her sister, Virginia McCormick of Washington, PA; step-daughters, Christina M. Powell of Bridgeville, PA and Linda (Lawrence) Delrosso of Pittsburg, PA; and three step-grandchildren, Bryce W. Powell, Jesse L. Delrosso, and Cody M. Delrosso, all of Pittsburgh, PA. Lorraine is also survived by sister-in-law, Joan Voytek, brother-in-law, John Lusk Sr., and many nieces and nephews. She was preceded in death by three brothers, Eugene J. Voytek, Albert Voytek and John D. Voytek and her sister, Josephine A. Lusk. Arrangements for Lorraine's final care and grave side ceremony have been entrusted to Royal Palm Memorial Gardens, Punta Gorda, Florid. A memorial service is being planned with the family in Pennsylvania.

The family of Lorraine E. Voytek Antal created this Life Tributes page to make it easy to share your memories.