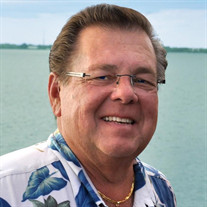 Joseph “Joe” Charles Kupferschmid went to sing with the heavenly angels on March 5, 2022 at the age of 75. His battle with Parkinson's in recent years showed his courage in facing life’s challenges with a smile, never losing that gleam in his eyes. Despite the progressive disease taking a toll on his body, he never lost hope and stayed strong until the end. He passed peacefully into glory, surrounded by his wife and children. Joe was born on January 3, 1947 to Charles and Norma Jean Kupferschmid of Roanoke, IL. Joe met Nancy, the love of his life, in high school at Roanoke Benson. They were married in 1967. They spent several years traveling together, enjoying life and building friendships that would last a lifetime. Joe began his career in 1966 at State Farm Insurance while acquiring his bachelor’s degree at Illinois State University. Joe and Nancy happily started a family in Carlock, Illinois. Although Illinois was always home, following 40 years of leadership at State Farm, Joe and Nancy retired to Punta Gorda/Port Charlotte, Florida to spend more time in the sunshine. He is survived by his loving wife, Nancy (Zimmerman) Kupferschmid and his two children: Janel (Vinod) Bommaiah; Tustin, California and Tyler (Michelle) Kupferschmid; Normal, Illinois. Joe loved his children and grandchildren with all of his heart. His passion for fishing, golfing, singing, grilling, and laughing will be remembered by all who knew him. His unwavering support, faithful encouragement, and sacrificial love has forever shaped his family: grandkids Clara, Nikhil, Neela, Eliza, Henry, and Neev are his legacy. Joe is also survived by his mother, 4 brothers, 2 sisters, and many nieces and nephews. He is preceded in death by his father and a brother-in-law. A small family service will be held at East Lawn Memorial Cemetery, followed by a celebration of Joe's life in Central Illinois later this year. In lieu of flowers, donations can be made in his honor to Tidewell Hospice or the Parkinson's Foundation.

Joseph &#8220;Joe&#8221; Charles Kupferschmid went to sing with the heavenly angels on March 5, 2022 at the age of 75. His battle with Parkinson's in recent years showed his courage in facing life&#8217;s challenges with a smile, never losing... View Obituary & Service Information

The family of Joseph Kupferschmid created this Life Tributes page to make it easy to share your memories.

Joseph “Joe” Charles Kupferschmid went to sing with the heavenly...

Send flowers to the Kupferschmid family.