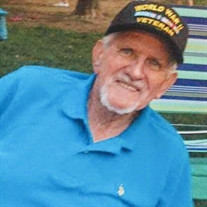 Eugene (Gene) C. Roaf (93) of Punta Gorda, Florida passed away suddenly at his home on Friday evening August 2, 2019. A memorial Service will be held at the 1st United Methodist Church in Punta Gorda on Friday August 9, 2019 at 10:00 AM. A New Hampshire memorial will be held Thursday, August 29, 2019 at 3:00 PM at the NH State Veterans Cemetery 110 Daniel Webster Highway Rte. 3 Boscawen, NH 03303. Gene was born in Newburyport, MA on January 7 1926. Gene was married to Mary Ellen Hitchcock on July 7, 1946.They were married for seventy-three years. He graduated from Newburyport High School and served our country in the US Navy. Gene was a plane captain maintaining a single Corsair fighter aboard the carrier USS Bennington during the battles of Iwo Jima and Okinawa in World War II. He served as a seaman 1st class and part of the Essex class carrier’s deck crew and part of task force 58.1 experiencing several close calls during the battles. After the war and the travel home Gene was discharged from the Navy Three days later. Gene went to work at Towle Silver in Newburyport, MA. Then he worked as a truck driver. His last 20 years plus in the job market he worked as a salesman. He and his wife resided in Newburyport and in 1975 they moved to Lake Winnipesaukee and then in 1998 after he retired moved to their home in Punta Gorda Isles, FL. Gene is survived by his wife Mary Ellen Roaf; brothers, Gordon and Dennis; Sister, Lorraine; Children, Eugene Roaf and his wife Sandy of Hampton, NH; Bruce Roaf and his wife Christine of Hampton, NH; Nephew. David and his wife Tara and their two daughters Sadie and Sophia; four grandchildren, EJ, Sean, Erik and Amy; seven great-grandchildren and one great-great grandson and many other nieces and nephews. Gene is preceded in death by parents, Gene and Sylvia; brother, Donald and his wife Lucille; and Richard Roaf. Gene and Mary were members of the First United Methodist Church. He was a lifetime member of the Neptune 8 in Newburyport and The BPOE Elks Punta Gorda Lodge 2606. In lieu of flowers, the family requests donations to be sent to the United Methodist Church 507 W Marion Ave., Punta Gorda, FL 33950 or New Hampshire Cemetery Veterans Association PO Box 626 Concord, NH 03302-0626. The Roaf Family

Eugene (Gene) C. Roaf (93) of Punta Gorda, Florida passed away suddenly at his home on Friday evening August 2, 2019. A memorial Service will be held at the 1st United Methodist Church in Punta Gorda on Friday August 9, 2019 at 10:00 AM. A... View Obituary & Service Information

The family of Eugene C. Roaf created this Life Tributes page to make it easy to share your memories.

Send flowers to the Roaf family.