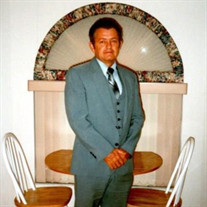 Dewey Wayne Ogle Sr was born on April 11, 1943 in Cowpens, South Carolina. He was the fourth of six children to Elbert Ogle and Roxie Elvira Stinnett. His siblings are: Jack Lynn Ogle (Deceased), Annie Ruth Hendrix (Deceased), Corinne Wise, JW Ogle, and Billy Eugene Ogle (Deceased). Growing up in Pahokee, Florida, he developed a very strong work ethic from an early age. Although Dewey did not complete his secondary education, he was always noticed for his ability to solve many day to day needs in a variety of trades. For example, he was efficient in mechanic work, plumbing, electricity, carpentry, roofing, flooring, etc. Dewey was not only a barber for many family members, but he was able cut his own hair. Much of his work years were spent in grocery store management. He never took shortcuts and always put in the hours to do the job right. Not surprisingly, Dewey also did many side jobs and taught his children the value of hard work on these side jobs. The projects ranged from painting a house, fixing cars, to installing a retaining wall for lakeside erosion for a neighbor. Of course, he did all of the repairs of his home and even constructed an addition to the home. Dewey married Henrietta Mofield, the love of his life, in October of 1963. They spent most of their adult life together in Punta Gorda, FL raising their three children: Dewey Ogle Jr, of Port Charlotte, Florida, Laura Ogle, of Punta Gorda, Florida and Jerry Ogle, of Bradenton, Florida. Dewey’s life was focused on several key principles: faith, family, and charity. He developed a strong faith in God early in life and never wavered on his acceptance of Christ as his savior. Early in his marriage, he taught Sunday school and always enjoyed singing traditional hymns. When life dealt him or the people he knew challenges, Dewey instinctively leaned into his faith. There is no doubt that his example helped lead others to Christ. Dewey’s family meant everything to him. His loyalty and commitment to Henrietta is a big part of where his story began since they met at such an early age. They never traveled apart and ultimately spent 57 years together. During his final days on earth, after God, her presence is what comforted him the most. Dewey beamed when speaking of his children. He always wanted a better life for them. He spoke many times that the reason he moved from Pahokee to Punta Gorda was to provide more opportunities for his children. Seeing all of his children develop a strong faith and become productive members of society was one of his proudest moments. Lastly, grandchildren held a very special place in Dewey’s heart. He loved to spend time with them and always smiled when he heard about their journeys. His grandchildren are: Jennifer Muse, Ashley Graham, Lauren Ogle, and Dillon Ogle. His fondness of charity is ironic since he lived a simple life of very modest means. Dewey never accumulated a significant amount of monetary assets as someone always needed material items more than he did. He shared at the end of his life that he wanted to be known for “helping the needy”. His humble beginnings always reminded him that some people along life’s journey truly need a hand as he and his family had been there. Dewey would love to give with a happy heart. He died without any monetary assets, but was one of the wealthiest persons many have met. Dewey was diagnosed with Parkinson’s in the mid 1990s. He never once complained as to why he was in this situation. There are no words that can describe the strength he showed during his illnesses. He loved life and fought to see his family for just one more day more than anyone ever imagined. He went home to be with God on July 9, 2020. Although he is no longer on this earth, his values and spirit will live on through the many people he impacted. He will be missed dearly. A service will place at Kays-Ponger & Uselton Funeral Home in Punta Gorda, FL on Monday, July 13, 2020 at 11am, with a gathering prior from 10-11am. He will be buried at Royal Palm Memorial Gardens following the service.

The family of Dewey Wayne Ogle created this Life Tributes page to make it easy to share your memories.

Send flowers to the Ogle family.