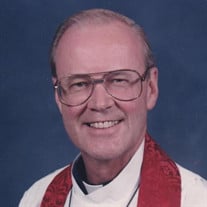 The Reverend Clyde W. “Coach” Kaminska, Ph.D., CFRE, went home to the Lord on May 26, 2020 after serving Him for 66 years in the ministry, 28 of them in Florida. He was born on July 24, 1929, in Buffalo New York to Charles “Cully” and Charlotte (Klein) Kaminska, both of whom pre-deceased him, as did his older brother Clayton. He is survived by his wife, Virderie (Binger) “the light of my life” of 37 years; daughter: Kathy Roberts of San Diego, CA and son: David of Kansas City, MO, children of Clyde’s first wife Barbara (Butler), are both successful college graduates. Clyde also leaves behind his niece: Anne Myers and nephew: Clayton (Donnie) and Donnie’s children: MaryAnn and Clayton Jr, all of Fayetteville NC. Pastor Kaminska graduated from Concordia (Bronxville N.Y.) in 1949 with an Associates in Arts degree. He then earned his M.Div degree from Concordia Theological Seminary (St. Louis). He returned to Concordia Bronxville in 1956 and spent over two decades serving as a Professor, Coach (football, basketball, baseball), Athletic Director (21 years), and Director of Public Relations and Development. He was instrumental in the building of Scheele Memorial Library as the centerpiece of the college’s transition to a four year institution. His own education continued. He earned an M.A. from Columbia University (N.Y.) and his Ph.D. from Fordham University (N.Y.) as well as attending the University of Alberta (Canada) and East Stroudsburg University (PA). In his “spare time” he was the voice for Con Edison (N.Y.) for their weekly “Athlete of the Week” radio program. Heard on three stations, he interviewed local athletes and their coaches for 11 years. He spent 15 summers as the Director of a Christian Camp (family and kids camp) “Camp of the Pines”, first in Willsboro N.Y. on Lake Champlain and later on Schroon Lake, N.Y. He was also an avid water skier, swimmer and had a wicked sense of humor. He impacted the lives of thousands of students, most of whom knew him as “Coach.” In 2008 he was honored with the “Servant of Christ” Award from Concordia Bronxville. He was acknowledged as a “builder of people and programs – a coach in the truest sense of the word,” as a Mentor, Educator, and Pastor. He was also inducted into the Clipper (Concordia Athletics) Hall of Fame, and this past Homecoming Weekend, October, 2019, he was honored at Concordia’s Legends Luncheon. After leaving Concordia Bronxville, he moved to St. Louis where he was the Vice President, Director of Development at Concordia Theological Seminary and continued his love of sports as their Basketball Coach. The United States Philanthropic Association awarded Pastor Clyde with the distinguished CFRE title – “Certified Fund-Raising Executive” – in recognition of his services to non-profit Organizations. He created programs for many Christian entities both in the USA and Canada, raising millions of dollars for buildings and programs. In each case he taught the organization how to do the same thing in the future without outside help. In one case in Canada, a small college needed $1 million NOW or it would close. Clyde organized a program which raised the money in just five short months. While in Canada, he realized there was a scarcity of such Christian firms, so he and Virderie founded “J.Clyde Ltd” and traveled the country helping other Christian organizations. “J.Clyde” stood for “Jesus Christ” as Canada, by law, would not allow a business to use that or a similar title for their business. In the U.S. he became a Senior Partner with one of the largest consultancies in the world, stipulating he would only serve Christian organizations. After “retiring” from academia and fund raising, Clyde served five churches in Florida either as their Pastor, teaching Bible Classes, or both. He also spent seven years as the Executive Director of the Charlotte (FL) Chorale. His entire life, whether in academics, sports, or other interests, was always tied to his spiritual Calling. Pastor Clyde’s father, “Charley Cully,” signed with the N.Y. Giants, but left baseball to join the Army to fight in WWI. Growing up, Clyde didn’t know whether he wanted to be a Pastor or a Coach. God allowed him to do both! “Some of my best sermons I ever preached were on the basketball court!” Known as an excellent Christian preacher, he will be missed by the many people he touched. Visitation will be held on Monday, June 1, 2020 from 9:30 AM until service time at 11 AM at Trinity Lutheran Church, 1379 South McCall Road, Port Charlotte, Florida 33981. Entombment will follow at Royal Palms Memorial Gardens Cemetery on Jones Loop in South Punta Gorda, Florida. The funeral service will be live streamed on Monday June 1st beginning at 11:00AM EST from Trinity Lutheran Church. It will also be recorded so you can watch it later if you are not available at that time. You do not need to have a Facebook account to access the service. Visit their website at TrinityLutheranChurchSWFL.org and scroll down to the Facebook logo on the home page. Click on the logo and it will take you to the service. In lieu of flowers, please consider making a donation in Coach’s honor to the Dr. Clyde Kaminska Scholarship Fund at Concordia College, Bronxville N.Y. You can make your donation online or mail to Lois Montorio, Concordia College, 171 White Plains Rd, Bronxville N.Y. 10708 and write “Kaminska” in the memo line. The family will be notified of your donation. Or you can make a donation to Trinity Lutheran Church, 1379 South McCall Road, Port Charlotte, FL 33981. Thank you.

The family of Rev. Dr. Clyde W. "Coach" Kaminska created this Life Tributes page to make it easy to share your memories.

Send flowers to the Kaminska family.