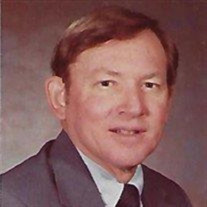 Clement B. Moorman, 93, of Punta Gorda, Florida passed away on Dec. 26, 2020 after a three-week battle with pneumonia from COVID-19. Clem was the oldest of five children born to Mary and Clement Moorman in South Bend, Indiana. After graduating from Riley High School in South Bend, he enlisted in the Army in 1945 and attended Ohio State University. Following his honorable discharge in 1947, he earned a Bachelors of Science and a Masters of Science at Butler University in Indianapolis, Indiana. He then began teaching in Indianapolis Public Schools. For most of his teaching career he taught middle school science at Eastwood Middle School in Washington Township in Indianapolis. After retiring in 1987, he taught part time at Sycamore School in Indianapolis for several years. For more than 35 years Mr. Moorman inspired his students, including his son Randy who had him in eighth grade, to seek knowledge and inquire about the world around them. Every year since 1992 Clem would compete in the Sr. Games winning medals in bowling, tennis, shot put, long jump, high jump, javelin, and discus. In 1999 Clem and his wife Nancy moved to Punta Gorda, Florida. In addition to competing and playing tennis, he enjoyed reading World War II books, flying his Cessna and Piper Cherokee aircrafts, RV traveling and going on cruises. Clem is survived by his loving wife of 52 years Nancy Moorman; daughter Carol Simmons (Steve); sons James, Steve (Diana), William (Vicki), and Randall (Scott) Moorman; seven grandchildren Lisa Simmons, Laura Metzler, Heather Demaree, Katie Cutshaw, Megan, Will, John Carter and Tom Moorman; six great grandchildren; one sister Mary Ann Kuzmic; two brothers John and Tom Moorman. He was preceded in death by both parents, and one sister, Elizabeth Miller. Services will be announced at a later date. Memorial donations can be made to Tidewell Hospice or the Wounded Warriors Project. Clem was well loved by all his family and friends.

Clement B. Moorman, 93, of Punta Gorda, Florida passed away on Dec. 26, 2020 after a three-week battle with pneumonia from COVID-19. Clem was the oldest of five children born to Mary and Clement Moorman in South Bend, Indiana. After graduating... View Obituary & Service Information

The family of Clement B. Moorman created this Life Tributes page to make it easy to share your memories.

Clement B. Moorman, 93, of Punta Gorda, Florida passed away on...

Send flowers to the Moorman family.