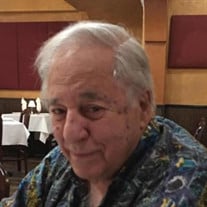 Casper (“Sonny”) Calabrese of Port Charlotte, passed away peacefully on January 27th at the age of 86. He was born in Brooklyn, NY to the late Joseph and Felicia (Gallucci) Calabrese. His brother, Joseph, predeceased him. He was a graduate of the New York School of Printing. Early in his career he worked as a printer in NYC, a career he very much enjoyed. He and his wife, Dina raised their family in Massapequa Park, Long Island, NY, where he was a devoted father to their three children. For many years he owned a 16’outboard, his pride and joy. He was an avid fisherman, and would catch so many flounder that he kept his family supplied all year long during “meatless” Fridays. He loved loading the boat up with family and picnicking on Fire Island during hot summer weekends, or to go clamming in the Great South Bay. The day’s catch could be measured in bushels. Dozens would be eaten raw “on the half shell”, with the rest saved for making linguine with clam sauce. Casper was a music lover, and enjoyed singing and dancing. In his younger years he played drums in a band that performed summer gigs in the Catskills. He was especially fond of Frank Sinatra and Tony Bennett, and enjoyed watching movie musicals and old “classics”. Casper was quick with a joke, but never used his humor at the expense of others. In 1990 he and Dina moved to Florida. He quickly made many friends with whom he kept active playing tennis, pool and bocce. Previously, he enjoyed playing handball, a favorite street activity in his youth. For many years he worked for the Charlotte County Sheriff’s Office. After retiring, he and Dina travelled to Europe, stopping in London, Paris, Florence and Rome. Casper was a caring husband to his beloved wife Dina of 65 years. He will be sorely missed by her and their children: daughter, Suzette McMahon, her husband, Greg and their children, Lindsay McMahon and Holly Dell ‘Avanzi (Rui); daughter, Janice Malloy, her husband Brian and their children, Melissa Malloy, Kimberly Santiago (Oz) and Nicole Jessup (Isaac), and son, James Calabrese, his wife, Theresa, and their children, Carly and Kate. Seven great-grandchildren also survive: Jason Ratliff, Jr., Anthony, Brian and Joseph Santiago, Mason and Ian Jessup and Marta Dell ‘Avanzi. Casper loved and was loved by his large extended family and wide circle of friends. Visiting hours will be on Friday, February 5 from 12:30 – 2:30 pm at Kays, Ponger and Uselton Funeral Home, 2405 Harbor Blvd., Port Charlotte, Florida. Burial will follow at Royal Palm Memorial Gardens, 27200 Jones Loop Road, Punta Gorda, Florida.

Casper (&#8220;Sonny&#8221;) Calabrese of Port Charlotte, passed away peacefully on January 27th at the age of 86. He was born in Brooklyn, NY to the late Joseph and Felicia (Gallucci) Calabrese. His brother, Joseph, predeceased him. He was... View Obituary & Service Information

The family of Casper J. Calabrese created this Life Tributes page to make it easy to share your memories.

Send flowers to the Calabrese family.