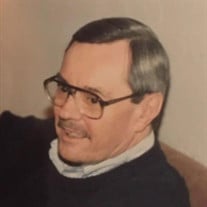 Bryan Murphy, 86, of Punta Gorda, FL, passed away on April 7, 2021. Bryan was born in Milwaukee, WI, to Gordon and Cecelia Murphy. A high school athlete in football, basketball, and track and field, he was a lifelong sports enthusiast. He contracted polio in October 1952 and was confined to the hospital for almost nine months. He had paralytic, respiratory, and bulbar polio and spent several months in an iron lung. He refused to give up and left the hospital with crutches and a body brace. He attended the University of Wisconsin at Milwaukee. In 1956, he married Jane Morehart and they moved to Hollywood, CA, for warmer climates and a new start in booming Los Angeles. He started his career in management in the aerospace industry at Hughes Aircraft and continued with Autonetics, Litton, and Planning Research Corporation. As he rose through the management ranks, he always had a job to give to colleagues and friends who had fallen on hard times. While raising his six children, his career reached its peak when he formed his own company, Mission Engineering Corporation, which provided logistical support to the Navy and Marines. On his retirement, he moved to Florida to be closer to several of his children. Bryan never met a stranger and he was a loyal friend to all he met. He was an important presence to his nephews, nieces, and cousin. His perseverance and his kindness to others, including constant attention to his friends, was an inspiration to all who knew him. His lifelong love for his wife and family reminds all who knew him of the power of the human spirit. Bryan had a unique personality of persistence and empathy. He refused to let polio define his life and he walked on crutches as long as his body held out. He travelled through airports (and via helicopters!) never using a wheelchair and his family never viewed him as anything but a vigorous man dedicated to his family. After his retirement, he organized reunions for his high school friends and maintained close contact with them. At his community in Punta Gorda, his daily calls and visits were a blessing to his friends who needed his help. He enjoyed his weekly poker nights with his friends. He organized birthday lunches and parties to provide joy to people who were his friends and neighbors. A family man to the end, his greatest pride was his large loving family. He is survived by Jane Murphy, his loving wife of 64 years; his brother Gordon Murphy and his wife Dorothy of Glenview, IL; daughter Christine Murphy; daughter Catherine DerOvanesian and her husband Martin; son Patrick Murphy and his wife Nancy; son Kevin Murphy and his wife Christine; daughter Stacey Murphy (Michael Hill); daughter Leslie Moreau and her husband Curtis; his fourteen grandchildren (Christine) Bryan Utley and his wife Stacie, Nicholas Utley; (Catherine) Ara DerOvanesian, Shelley Riggs and her husband Vincent, Anna DerOvanesian and fiancé Benjamin Duerr, Jacqueline DerOvanesian; (Patrick) Reed Murphy and his wife Beth, Grant Murphy-Herndon; (Kevin) Bryan Murphy, Thomas Murphy, Mark Murphy; (Stacey) Jane Murphy Hill; (Leslie) Gordon Moreau, Catherine Moreau; his great-grandchildren (Christine) Catherine Utley; and (Patrick) Lily Murphy; his nephews and nieces (Jane’s sister Patricia) Laura Uzzel, Steve Reith, Julie Reith; (brother Gordon) Lynne Murphy and Craig Murphy; (Jane’s sister Barbara) Linda Copeland, Michael Annen, Larry Annen, and Jeff Annen. He is also survived by his many friends who will miss him deeply. In lieu of flowers, the family requests donations be made to https://christopherreeve.org/donate which supports people with post-polio syndrome and paralysis.

Bryan Murphy, 86, of Punta Gorda, FL, passed away on April 7, 2021. Bryan was born in Milwaukee, WI, to Gordon and Cecelia Murphy. A high school athlete in football, basketball, and track and field, he was a lifelong sports enthusiast. He... View Obituary & Service Information

The family of Bryan James Murphy created this Life Tributes page to make it easy to share your memories.

Send flowers to the Murphy family.